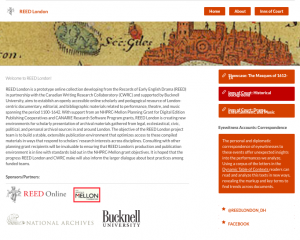 Working with collaborators at other universities in the US as well as Canada and the UK, the project team established protocols for turning these archival materials (account books, legal documents, correspondence) into structured TEI-XML, and then ingested the files into the CWRC-Writer environment, which allows editors to do advanced text encoding in a WYSIWYG (What You See Is What You Get) environment. Then, editors could do advanced semantic encoding – teasing out the meanings of the words that have to do with people, places, objects, and events – and prepared each document for dialogue with the semantic web by identifying “named entities”  as linkable data. The team quickly realized that they had a valuable opportunity to link entities who are already known and widely connected on the web, such as Queen Elizabeth I and Francis Bacon (click on links to see how data is linked across web resources for these major historical figures), but also to “mint” entities for people who we suspect are represented in other digital research, but have yet to be included via URI – the manner by which data is disambiguated. In this way we were able to make discoverable people like Alice Carleton, a woman to whom letters were written describing theatrical and political events in extensive detail but who until REED introduced her has only been identified by her relationship to her brother Dudley, an English ambassador to the Venetian court.

During this year of discovery four Bucknell students participated as named research assistants on the project: Maureen Maclean (’19), Arianna Bachman (’20), Rachel Milio (’22) and Charlotte Simon (’22). Each student focused on a different aspect of the project that interested them. Maureen focused on identifying complex historical places; Ari undertook complex tagging of masque texts; Rachel dug into the influences of classical literature on 17th century drama, and Charlotte dove into the challenge of figuring out who paid, who was paid, and what could be considered goods and services related to performance.

Also during the year, faculty members Katie Faull, Obed Lira, John Westbrook, and Ann Tlusty assessed the CWRC environment in relation to their own digital scholarship projects to determine whether this approach to textual editing might work for them. As a result, Faull’s Moravian Lives and Lira’s Florentine Codex projects are now being developed as multilingual, multimodal digital scholarly editions in a Bucknell-hosted CWRC instance.

Jakacki is in the process of applying for more funding to implement this new instance, working with colleagues across L&IT as well as more faculty and students.